Posted on June 17, 2016 by essentialdailyscriptures

Pretty much everyone has heard the word Christianity, but there is an increasing amount of misinformation out there, and many don’t know what that involves anymore. So what, really, is Christianity at its most basic level? More to the point, what does Jesus want from us–because let’s face it, if we’re talking Christianity, it’s all about Him anyway, isn’t it? If someone from another religious tradition who knows little to nothing about our faith asks you, do you know? Could you answer? First Peter 3:15 tells us to “…treat the Messiah [Jesus] as holy, as Lord [your Master] in your hearts; while remaining always ready to give a reasoned answer to anyone who asks you to explain the hope you have in you — yet with humility and fear.” So, let me ask: if you’re a Christian, what is your hope–do you understand what you are hoping for? And, can you tell someone else?

“For God did not send His Son into the world to condemn the world, but that the world through Him might be saved. He who believes in Him is not condemned; but he who does not believe is condemned already, because he has not believed in the name of the only begotten Son of God. And this is the condemnation, that the light has come into the world, and men loved darkness rather than light, because their deeds were evil. For everyone practicing evil hates the light and does not come to the light, lest his deeds should be exposed. But he who does the truth comes to the light, that his deeds may be clearly seen, that they have been done in God.” ‭‭(John‬ ‭3:17-21‬)

I’ve bracketed the rough meanings of the Hebrew words and it requires a little effort for those of us without a first-hand knowledge of Biblical Hebrew, yet reading through these verses in this translation is worthwhile, because doing so helps us better get at the heart of salvation. Unfortunately, most of our English Bibles use the phrase “believes,” which can be misunderstood in today’s vernacular. We can believe a lot of things, but that merely requires that we acknowledge something mentally, not necessarily buy into it whole-heartedly. On the other hand, saying that “the person of faith who is receiving or accepting Christ is the one who is not judged,” is more faithful to this passage’s intent.

So, what is Christianity at its most basic level? What does Jesus want from you? Christianity at its most basic level is receiving or accepting the person of the Son of God–it involves a recognition of our guilt before God, of our inability to fix the sin-nature we are all born with, that Jesus has paid the punishment our sins required, and trusting that through Him we are accepted by the Father. It is all done, finished–“tetelestai” (paid in full), as He said on the cross right before He died. And a genuine acceptance of Jesus and all He is will generate in us a subsequent love for and desire to please Him. Because He said, “if you love Me, keep my commands,” we will obey Jesus when we really love Him.

But can you explain this to someone else when they ask–the hope that you have in you, what it is that you are hoping for? Many may answer that they are hoping to avoid the punishment of hell after this life is over–but, who wants to be punished? Some will say that they are hoping to be resurrected one day and spend eternity in heaven. But, do you realize that Jesus came not only to spare us from eternal punishment and bring us to Himself in eternity, but also to completely save us from our sins (Matthew 1:21)? And although His own will ultimately be kept out of hell and be with Him forever, as we obey Jesus we will also live more holy lives in the here and now: this is what the Bible calls our sanctification. The problem is sin–not just the eternal penalty for sin, which Jesus completely paid for, but also the sin-nature we are all born with and indulge, apart from the intervention of God. Jesus came to save us from our sins, and that process begins now because it is God’s desire that we live holy lives as His followers now, rejecting sinful decisions and choosing godly ones. God wants a holy people set apart for Himself, and if we’re not actively pursuing holiness, we’re not getting Christianity. And, it is because many who believe they are Christians aren’t living increasingly holy lives that the name of Jesus–Christianity–is increasingly misunderstood and ill-spoken of.

So, what is Christianity? It is such a faith in who Jesus is and what He has done that results in a process of increasing holiness in our lives through the power He provides. And what is our ultimate hope? An eternal future completely free from the corrupting influence of sin–what the Bible calls our glorification. This is God’s agenda, it is what Jesus wants from us, and it is what we, as those who say we belong to Him, must live and be able to explain to others!

Thank You that by accepting and receiving You, I am not condemned. Help me set my mind on things above and pursue Your holiness! Amen. 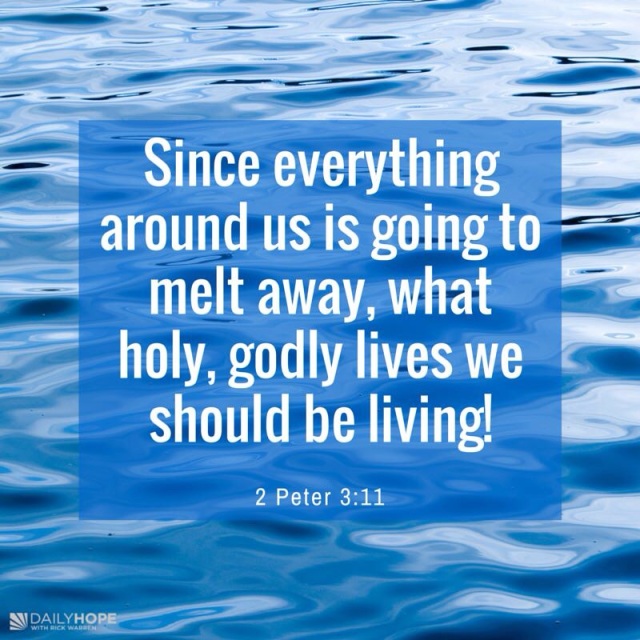 Do you want to grow in your knowledge of our Lord and Savior Jesus Christ, but aren’t sure where to start? Essential Daily Scriptures is a ministry for people who want to study God’s Word, but don’t have a lot of time. Each day’s study covers one verse and takes approximately fifteen minutes, incorporating significant amounts of Scripture directly from the NKJV Bible, so you’re able to get right into God’s Word with a minimal time investment on a daily basis. May “the Father of glory…give to you the spirit of wisdom and revelation in the knowledge of Him.” (Ephesians 1:17b)
View all posts by essentialdailyscriptures →
This entry was posted in Uncategorized and tagged giving an answer, glorification, Heaven, sanctification. Bookmark the permalink.