Posted on January 25, 2014 by essentialdailyscriptures

Are you ready to die? If you knew today was your last day, would you be at peace, or would you be secretly terrified? Although this might sound like a particularly strange question, the truth is that none of us knows the exact moment our time is up, and each of us should, therefore, put our eternal affairs in order right away.

“…all the days ordained for me were written in your book
before one of them came to be.” (Psalm 139:16b NIV)

Dying has been referred to as the moment we “meet our Maker,” and indeed, it is. We are told, “…it is appointed for men to die once, but after this the judgment.” (Hebrews 9:27) There is a finality to it that causes many to instinctively and rightly feel that they are are not ready, yet counterintuitively, most of humanity gives as little thought to it as possible. This is not wise, for rather than avoiding this inevitable moment, we should prepare for it. But how are we to prepare for it? Is there something special we are to do? The truth is that there are two requirements that must be met for us not to fear the judgment that awaits every human being at the moment of his death.

The first thing we need to do in order to put our spiritual affairs in order is to repent–to make sure our life is really free from any sin we are aware of. (See http://www.christianity.co.nz/repent1.htm for an excellent explanation of repentance.) For those who have known God for a while, this may be as simple as honestly assessing their present behavior and turning away from anything that we’ve let slip. As Christians, we can’t habitually live in sin. I John 3:9 tells us, “Whoever has been born of God does not sin, for His seed remains in him; and he cannot sin, because he has been born of God.” Yet perhaps we have unintentionally developed habits or behaviors or thought patterns that are not pleasing to God; upon recognizing them as such, these we should immediately abandon. For others who have never bothered to find out first hand what God says, it may involve sitting down for once in their lives and actually reading God’s revelation to us, the Bible, so they can know what is sin–because you surely can’t avoid it if you don’t know what it is.

The second thing we need to do to put our affairs in order is to trust in the forgiveness Christ has earned for us through His death on the cross two thousand years ago. God tells us, “Therefore, as through one man’s [Adam’s] offense judgment came to all men, resulting in condemnation, even so through one Man’s [Christ’s] righteous act [voluntary sacrificial death on the cross] the free gift [forgiveness] came to all men, resulting in justification of life. For as by one man’s disobedience many were made sinners, so also by one Man’s obedience many will be made righteous.” (Romans 5:18, 19) The death of the Savior, God’s holy Son, Jesus the Christ paid for the penalty of sin in God’s eyes.

Yet many have swerved from the truth of the Gospel. Rather than faithfully reading and studying the entirety of Scripture, some in the modern church have latched onto bits and pieces of it and watered it down to make it more palatable to a point where it seems ludicrous that any should be damned. Yet we know from Christ’s own words that most will not be saved, for He said, “Enter by the narrow gate; for wide is the gate and broad is the way that leads to destruction, and there are many who go in by it. Because narrow is the gate and difficult is the way which leads to life, and there are few who find it.” (Matthew 7:13, 14)

We have taken the doctrine of grace–of the unmerited favor of God–and have hammered home that all we have to do to be saved is accept the free gift of salvation to a point where our modern sensibilities actually believe we can do this without repenting–without ever changing, because changing requires work (sometimes quite a bit) and that would mean we’ve somehow earned our salvation. What contorted and damning thinking!

If you actually read the Bible, what it says, over and over and in many different words, is to repent. Right before His ascension into heaven, Jesus Himself told His disciples, “Thus it is written, and thus it was necessary for the Christ to suffer and to rise from the dead the third day, and that repentance and remission of sins should be preached in His name to all nations, beginning at Jerusalem.” (Luke 24:46b, 47) Repentance–a turning away from sin–always comes before the forgiveness of sins, and those who do not repent will not be forgiven! Do a search of the word “repent” on an online Bible site such as Biblegateway.com or manually in your Bible–there is no other way.

The Apostle John goes on at length about the interrelationship between holy living and belonging to Christ:
“And you know that He was manifested to take away our sins, and in Him there is no sin. Whoever abides in Him does not sin. Whoever sins has neither seen Him nor known Him. Little children, let no one deceive you. He who practices righteousness is righteous, just as He is righteous. He who sins is of the devil, for the devil has sinned from the beginning. For this purpose the Son of God was manifested, that He might destroy the works of the devil.” (I John 3:5-8)

There was a plan to Jesus’ coming. It wasn’t just to take away God’s punishment of–his wrath toward–sin. It was a master plan to actually save those who come to Him from sin. (Recall that the angel told Joseph, “And she will bring forth a Son, and you shall call His name Jesus, for He will save His people from their sins.” Matthew 1:21) It starts with our repentance, our turning away from the intentional commission of sin in our lives, and the forgiveness God bestows on us through Christ. “This is the message which we have heard from Him and declare to you, that God is light and in Him is no darkness at all. If we say that we have fellowship with Him, and walk in darkness, we lie and do not practice the truth. But if we walk in the light as He is in the light, we have fellowship with one another, and the blood of Jesus Christ His Son cleanses us from all sin.” (I John 1:5-7) God forgives us when we repent, not before–and certainly not if we don’t repent!

But it doesn’t end there–it ends on the day God removes us completely from even the temptation and presence of sin in eternity:
“And now, little children, abide in Him [in His teaching, in a lifestyle of repentance] that when He appears, we may have confidence and not be ashamed before Him at His coming. If you know that He is righteous, you know that everyone who practices righteousness is born of Him…Beloved, now we are children of God; and it has not yet been revealed what we shall be, but we know that when He is revealed, we shall be like Him, for we shall see Him as He is. And everyone who has this hope in Him purifies himself, just as He is pure.” (I John 2:28, 29, 3:2, 3)

The reason many people, even some who believe themselves to be Christians and saved, are afraid of death is because they haven’t done one or the other of these two requirements. Either they haven’t repented–they haven’t turned away from sins they are doing–or they haven’t trusted in the forgiveness God freely gives them because of the death and resurrection of Christ when they repent. So, are you afraid to die? You don’t have to be! But you do have to make your peace with God, on His terms–the way He says to in the Bible.

(The reader should also seriously consider researching the concept of restitution for wrongs committed.) 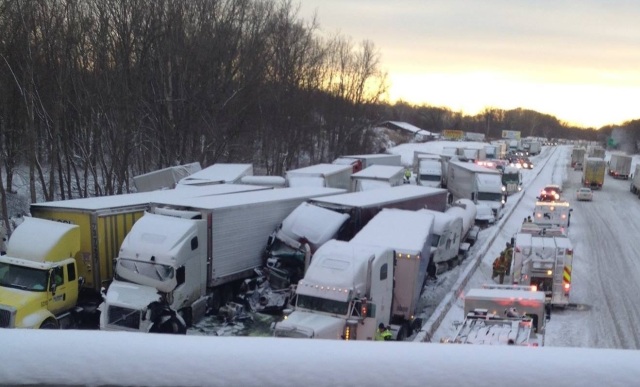 Do you want to grow in your knowledge of our Lord and Savior Jesus Christ, but aren’t sure where to start? Essential Daily Scriptures is a ministry for people who want to study God’s Word, but don’t have a lot of time. Each day’s study covers one verse and takes approximately fifteen minutes, incorporating significant amounts of Scripture directly from the NKJV Bible, so you’re able to get right into God’s Word with a minimal time investment on a daily basis. May “the Father of glory…give to you the spirit of wisdom and revelation in the knowledge of Him.” (Ephesians 1:17b)
View all posts by essentialdailyscriptures →
This entry was posted in Uncategorized and tagged accidents, being saved, Christ, death, dying, faith, faith in Christ, grace, making peace with God, meet your Maker, repentance, salvation. Bookmark the permalink.